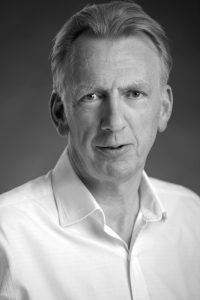 Simon started his career with United Biscuits and enjoyed a fantastic 30 year career in all parts of that business in the UK and overseas. His emphasis was always in sales and marketing and he often says that business cannot exist without sales people – they are literally the lifeblood

Although he has worked in a number of quite different industries, his last venture into “making things” was Tuckey’s Proper Biscuits in 2104 – an attempt, successful but not quite big enough, to change the course of a giant market from poorer and poorer quality to proper taste. The brand idea derived from using only proper ingredients with interesting (not cheap) provenance and proper baking methods. Two of the UK’s top supermarkets gave the venture brilliant support and distribution in hundreds of stores, but the idea of great tasting food at an appropriate price was a little early

Simon has always enjoyed entrepreneurship and believes that the best companies and managements encourage all their people to feel like entrepreneurs. At United Biscuits, he was always given the freedom to pursue his own ideas and the mentoring to make sure those ideas stayed on track and fitted in with the whole. This kind of active management required those doing the management to take time to listen, to inform, to test and sometimes just to kick back and stayed in touch. Today’s demanding short term-ism has rendered this kind of management unaffordable for many organisations; Simon feels this is a retrograde step and one that has directly impacted on customer satisfaction and financial success

In pursuing this style of management in United Biscuits (now Pladis) and New Zealand Milk (now Fonterra), Simon was able to drive through initiatives like Mini Cheddars, resealable packs from Japan to the UK, 20% range rationalisation, brand number reduction, ingredient provenance maintained (Anchor Butter) in a highly competitive marketplace, use of skunk groups to achieve dramatic innovations, productive for the staff factory closure

After selling Anchor Foods UK into a merger with Area for a still eye-watering multiple, Simon worked on buying his own food business, mounting bids for both Covent Garden Soup and Ambrosia though both companies were bought by much larger organisations. He then moved into healthcare and built, with a group of doctors, a new day-case surgery model, based on his knowledge of continuous production methods; this model was successfully sold 2 years later

Having always wanted to be an architect, Simon took some land with planning blight (planning permission had repeatedly been turned down) and worked with an architect and planners to create a new and striking design for a modern house in an old setting. To create a new building is to exercise considerable creativity, and great left brain logical skills

Tuckey’s Proper Biscuits was launched in the face of a highly competitive market-place but achieved some notoriety. Simon put together an entirely virtual team to do the launch and found that this model has many advantages over something more traditional. The venture was also instrumental in making an introduction to the College of Medicine, a leading charity.  There he has taken on the role of Ambassador to the food industry and is working with figures from across the food manufacturing, retailing and media industries to forge new approaches to reversing the trend to obesity and associated ill health… literally to encourage the notion of food as medicine

As a coaching and development enthusiast, Simon brings his management and leadership experience to Huntwood